In 1974, physicist Stephen Hawking thought that a black hole might not really be a vortex of nothingness. He said in the mess at its centre, charged particles – which would normally be together – could become separated, with one beyond the event horizon, and the other swirling around just outside. This faint glow in the vortex was dubbed “Hawking radiation” and experts are still arguing over whether it exists, after his death.

In early 2018, I found myself facing a Hawking moment, with cars. I had long wanted to own a 1980s Subaru Vortex, with its wedge shape, asymmetrical steering wheel and fighter jet dashboard.

Incidentally, the Vortex was only known as a Vortex in Australia and New Zealand. In the U.S. it was simply an XT, but for Japan it was the Alcyone: that’s the central and largest star of the Pleiades constellation, which makes up the Subaru logo.

Video tour of my Vortex here

When a blue 1985 Vortex came up on Gumtree nearby, needing some engine work, I pounced on it and bought it from an old couple for a few hundred dollars. The husband was almost blind, so they were downsizing to just one car. Their Vortex’s engine had started leaking water one morning as they backed out, so it stayed in the garage and went up for sale, after a mechanic said (on the phone) that it could be the water pump. The old man got teary as I had it towed away.

For a 33-year-old car, it wasn’t too bad: it had some minor scratches and dents, some rust around the boot welds, sunroof and front chassis rail, and it needed some attention to the paint/clear coat. But it also had something I wasn’t keen on: shiny auto store hubcaps. The original hubcap was a very 80s blocky design, so as the engine was brought back to life, and the rust and paint was done, I went looking for those hubcaps.

Gumtree provided me with a very nice one in Brisbane from a parts car, but I needed another 3. That’s when I rang a fellow on the Sunshine Coast, about his ad for all types of Vortex parts. He said on the phone he should be able to “dig up” his hubcaps, which no-one had wanted for many years.

I arrived at his place (a farm being turned into a housing estate) and he showed me 2 hubcaps, covered in soil and rusty around the wheel rim clamps. I don’t think he was joking when he said he would dig them up! I bought them, and as I left he mentioned that he had to vacate his farm soon, and he had a “complete” automatic Vortex in the shed, along with a car shell. “Make an offer for both,” he said. He’d salvaged some parts off the silver shell for his own car, and had bought the White Vortex in Brisbane in 2010 – driving it home to his shed, where it stayed.

I thought I might be able to use the shell to fix the rusted chassis rail in mine, so with my wife’s permission I later made him an offer for the compete car and the shell. It was a cheap price – towing them home would cost about as much as buying them – but he was moving off the farm in just a few weeks, and needed them gone.

The day I went to pick up my “accidental” Vortex purchase, it was not long after a week of heavy rain, so we had to use his tractor to get the 2 cars up a hill to the tow truck.

On closer inspection, the white car had more rust than mine, damage to the front bumper, and dirty wet carpet. It would need a good clean, once the tow truck brought it home.

On my lawn at home, it became clear that the white Vortex was an unusual purchase: it had “TURBO” written on the dashboard speedo – along with an air intake on the bonnet – but no turbo in the engine bay. However, there was a suspicious hole in the exhaust line going from the engine, which was probably for the exhaust gas “dump” from the turbo. I reckon the old man had harvested the turbo from this Vortex, for his own car.

As well, this Vortex was made in mid-1985 (some months earlier than mine), had no sunroof, but did have a wiper/washer on the back window. It had a ‘height’ button on the dash, but no air suspension. It had a 4WD button between the seats, but was front-wheel-drive only. It even had a different font for the Vortex badge.

There was some talk in online forums about how 1980s Subaru executives brought out some cars from Japan early to show off to dealers, before the official on-sale date. Was this White model the first (or one of the first) Vortex cars in Australia? Subaru Australia didn’t have any information, and Subaru Japan never got back to my Facebook message.

I did find an old bank card in the car, with a woman’s unusual name on it. I Googled her name, found her number and texted her: she was the owner who’d sold it to the old man in 2010. Her mum owned a restaurant, and had bought the Vortex off the original owner, who was a regular customer there. However, she couldn’t help with any more history. 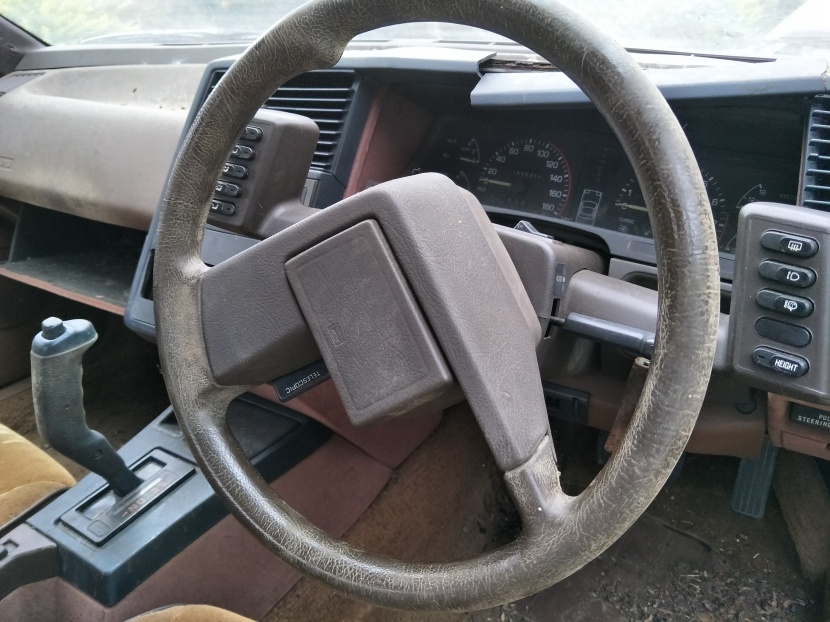 There was one more surprise with this car: when I opened up the boot, there were 4 hubcaps stacked in there. So I could now fit out my own car, with a couple to spare (of varying quality). My mechanic got the white Vortex running (rough) one day, after a lot of encouragement, but we didn’t put it into gear: I simply wanted to see if it would start.

With my Vortex now back from the body shop, and running OK after a rusted-though coolant pipe was replaced, it was time to get it registered. Plus, the Vortex shell had been cut up by the body shop for me to keep the spare panels and glass. I didn’t want to do up another car.. so I put the white Vortex online to sell, for a few hundred dollars.

I had offers for bits of the car (I believe the rear disc brakes are popular for upgrading the Subaru Brumby from its drum brakes) but I didn’t want to have a car in pieces on the lawn. Eventually, a local car detailer offered to buy it, at a hefty discount, and arranged to get a tow truck to pick it up. His wife had seen the car advertised, liked the look of it and wanted to get it going. The husband wasn’t a fan, but they towed it away anyway.

A couple of weeks later, the call went out on a Subaru forum for an un-cracked dashboard for the white Vortex – they’re dubbed “unicorns” by owners, as they’re so rare. So I’m guessing that call went nowhere. Then a week or so later, the white Vortex was up for sale on Gumtree – initially for more than I was paid, then it was reduced, and then it disappeared.

So for me, the white car went into a black hole.. but my blue Vortex is still shimmering like that Hawking radiation – in theory at least.